"Custer was rarely without his dogs. They accompanied him on hunts and on campaigns; they ranged themselves at his feet, rested their heads on his lap, shared his bed and his food, got under foot, made nuisances of themselves, but never lost their special place in his affection. They were like people to him".
Brian Dippie

Poor Maida, in life the firmest friend,
The first to welcome, foremost to defend;
Whose honest heart is still your master's own,
Who labors, fights, lives, breathes for him alone.
But who with me shall hold thy former place,
Thine image what new friendship can efface.
Best of thy kind adieu!
The frantic deed which laid thee low
This heart shall ever rue.
General Custer's poem to his dog Maida, killed during a buffalo hunt 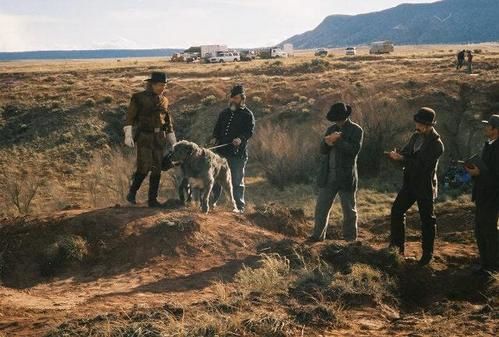 The use of dogs for hunting on the Frontier
extract of James E. Potter, The Magazine of Western History,  Autumn 2005

... Many officers in die West owned greyhounds or other hunting dogs, which accompanied them even during Indian campaigns. General Eugene A. Carr took his greyhounds on the 1869 Republican River Expedition, which culminated in the death of Tall Bull and defeat of the Southern Cheyenne Dog Soldiers by the Fifth U.S. Cavalry and the Pawnee scouts at the Battle of Summit Springs. Convinced that his hounds could easily run down an antelope. Carr one day set them loose while William K. "Buffalo Bill" Cody and scout captain Luther North looked on. After a brief chase the antelope disappeared over a hill, with the panting greyhounds lagging hadly and losing ground at every step. Cody could not resist a quip at Carr's expense, remarking. "General, if anything the antelope is a little bit ahead."

In the 18705 Colonel Ranald S. Mackenzie kept at Fort Sill, Indian Territory, a pack of foxhounds specially trained, or so the general thought, to pursue only wildcats and hears. After one exciting chase, Mackenzie was mortified to find that his prized hounds had cornered a pack of wild pigs.

Dogs appear everywhere in accounts of life on officer's row. Frances M. A. Roe. the wife of Lieutenant Fayette Roe, owned a well-loved greyhound named Hal while the couple lived at Fort Lyon, Colorado Territory, in 1871. In her letters Roe told of following her dog in chases after coyotes andjackrabbits. And, despite their failure to catch the antelope in 1869, Carr's greyhounds did successfully run down deer near Fort McPherson, Nebraska, in 1870. Custer's dogs stayed with him constantly, and they often appear in photographs taken during his service on the plains. Reports from western posts frequently mention bird dogs. Custer and his dogs at Little Bighorn

When the battle began, Custer let his dogs behind him, but his orderly John Burkman couldn't catch them before they left the pack train and followed their beloved master.
Cheyenne warrior Wooden Leg remembered a dog on Custer Hill when the Last Stand had finished. John Burkman said that he had seen one of the dogs on a distant hill, on June 26.

None of the dogs has been seen again.

"Tuck" regularly comes when I am writing, and lays her head on the desk, rooting up my hand with her long nose until I consent to stop and notice her. She and Swift, Lady and Kaiser sleep in my tent."