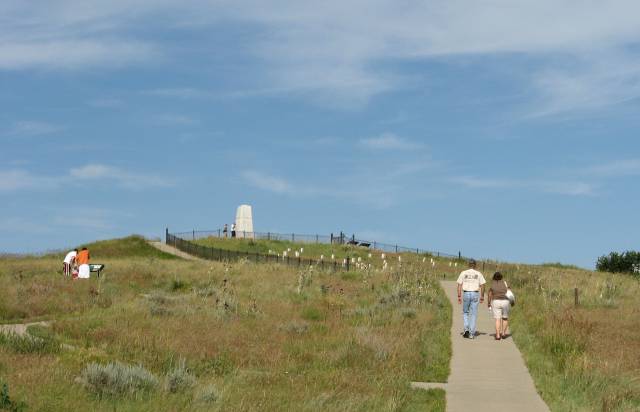 "Remaining mounted most of the time, Wooden Leg rode from place to place north of the ridge. While his older brother, Yellow Hair, crept in closer with the other warriors, Wooden Leg stayed farther back, as his father had asked.

From a gulch just north of the west end of the ridge, he could see that all the soldiers were killed except a band that remained hidden behind their dead horses.

He could see along the north slope of the ridge, where hundreds of Indians crept in closer. (...) Wooden Leg could not see the soldiers but he knew where they were as they fired from behind their horses.

Wooden Leg dismounted and let out his long lariat for leading his horse while he, too, crept a little closer up the slope. During this portion of the battle, Wooden Leg fired several shots with his captured rifle and about twelve shots with his six-shooter. It was much easier to shoot while crawling up the slope that it had been on horseback, Still, he could not see any particular soldier to shoot at, so he just se4nt his bullets in their direction.

Wooden Leg crawled to a slope a short distance north of the hill where the stone monument now stands (Custer Hill). About half a lariat length in front of Wooden Leg, a Lakota wearing a warbonnet was lying down behind a clumb of sagebrush. Other Indians, boys included, mingled nearby, crowding in to try to strike a blow on any dead soldiers they might find.

A Cheyenne boy was lying down right next to the warbonneted Lakota. As the man peeped up to fire, a soldier bullet hit him exactly in the middle of the forehead, His arms and legs jumped spasmodically for a few moments, then he died. The boy quickly slid back downhill into the gully and ran away."