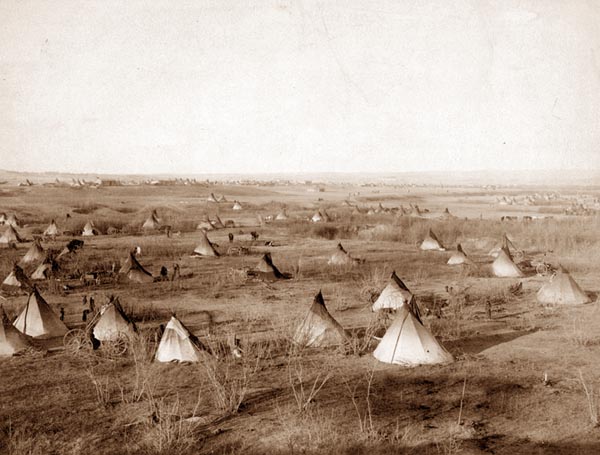 The village of Little Bighorn was never "five miles" long as the myth says... But creating an invincible Indian village, full of thousands of fictionous warriors, can be useful to depict Custer as a fool and present the men who betrayed him as reasonable officers...


THE REAL SIZE OF THE INDIAN VILLAGE

Lieutenant Oscar Long's early map (1878) showed that the village was 1.32 miles long, not extending past Medicine Tail Coulee ford, which pretty much matches Grinnell's (based on Soldier Wolf's testimony) & Ricker's (based on Respects Nothing's account) maps.
The Indians moved north after the first day of fighting, giving the post-battle observers (General Terry's men) the impression of one continuous larger camp.

However, Lieutenant Edward Maguire's map (of the 7th cavalry) did not show the enormous village, so the army (George Elliott's report, september 1876) and Marcus Reno's defense at his Court of Inquiry created a false map that was claimed to be Maguire's copy (see below).


HOW A LARGER VILLAGE WAS CREATED ...

... and let people believe that Custer had attacked an enormous, invincible village with thousands of "angry Sioux".

Map A: Original Maguire's map, 1876 (the area in dark grey is the Indian village) Map B (presented at the court of inquiry on Little Bighorn. Major Reno's defense claimed it was a copy of  A) During the Court of Inquiry on Little Bighorn, witnesses Varnum, Herendeen, Godfrey, Gerard, DeRudio and even Wallace said that the map was incorrect. But the map was not changed. The cover-up had to continue because the betrayal was too embarassing for the army.

Phil Swartzberg of Cartographic Inc. (specialists of maps, Minnesota), 1995 :
“It would seem highly probable that the Map B (used by Reno) was drafted with Map A as a visual guide. The conclusion must be that the changes were intentional.. (…) it may be concluded that (Map B) was created to change the official view of the Battle of the Little Big Horn.”