The story of the Cheyenne chief during Custer's Last Stand
TWO MOON'S ACCOUNT
source: Two Moon's interview, 1898 (portrait of the Chief below)

"I went to water my horses at the creek, and washed them off with cool water, then took a swim myself. I came back to the camp afoot. When I got near my lodge, I looked up the Little Horn towards Sitting Bull's camp. I saw a great dust rising. It looked like a whirlwind. Soon Sioux horseman came rushing into camp shouting: 'Soldiers come! Plenty white soldiers.'

"I ran into my lodge, and said to my brother-in-law, 'Get your horses; the white man is coming. Everybody run for horses.'

"Outside, far up the valley, I heard a battle cry, Hayay, hay-ay! I heard shooting, too, this way [clapping his hands very fast]. I couldn't see any Indians. Everybody was getting horses and saddles. After I had caught my horse, a Sioux warrior came again and said, 'Many soldiers are coming.' "

Then he said to the women, 'Get out of the way, we are going to have hard fight.'

"I got on my horse, and rode out into my camp. I called out to the people all running about: 'I am Two Moon, your chief. Don't run away. Stay here and fight. You must stay and fight the white soldiers. I shall stay even if I am to be killed.'

"I rode swiftly toward Sitting Bull's camp. There I saw the white soldiers fighting in a line [Reno's men]. Indians covered the flat. They began to drive the soldiers all mixed up—Sioux, then soldiers, then more Sioux, and all shooting. The air was full of smoke and dust. I saw the soldiers fall back and drop into the river-bed like buffalo fleeing. They had no time to look for a crossing. The Sioux chased them up the hill, where they met more soldiers in wagons, and then messengers came saying more soldiers were going to kill the women, and the Sioux turned back. Chief Gall was there fighting, Crazy Horse also.

"I then rode toward my camp, and stopped squaws from carrying off lodges. While I was sitting on my horse I saw flags come up over the hill to the east like that [he raised his finger-tips]. Then the soldiers rose all at once, all on horses, like this [he put his fingers behind each other to indicate that Custer appeared marching in columns of fours]. They formed into three bunches [squadrons] with a little ways between. Then a bugle sounded, and they all got off horses, and some soldiers led the horses back over the hill.

"Then the Sioux rode up the ridge on all sides, riding very fast. The Cheyennes went up the left way. Then the shooting was quick, quick. Pop—pop—pop very fast. Some of the soldiers were down on their knees, some standing. Officers all in front. The smoke was like a great cloud, and everywhere the Sioux went the dust rose like smoke. We circled all round him—swirling like water round a stone. We shoot, we ride fast, we shoot again. Soldiers drop, and horses fall on them. Soldiers in line drop, but one man rides up and down the line—all the time shouting. He rode a sorrel horse with white face and white fore-legs. I don't know who he was. He was a brave man.

"Indians keep swirling round and round, and the soldiers killed only a few. Many soldiers fell. At last all horses killed but five. Once in a while some man would break out and run toward the river, but he would fall. At last about a hundred men and five horsemen stood on the hill all bunched together. All along the bugler kept blowing his commands. He was very brave too. Then a chief was killed. I hear it was Long Hair [Custer], I don't know; and then five horsemen and the bunch of men, may be so forty, started toward the river. The man on the sorrel horse led them, shouting all the time. He wore a buckskin shirt, and had long black hair and mustache. He fought hard with a big knife. His men were all covered with white dust. I couldn't tell whether they were officers or not. One man all alone ran far down toward the river, then round up over the hill. I thought he was going to escape, but a Sioux fired and hit him in the head. He was the last man. He wore braid on his arms [sergeant].

"All the soldiers were now killed, and the bodies were stripped. After that no one could tell which were officers. The bodies were left where they fell. We had no dance that night. We were sorrowful.

"Some white soldiers were cut with knives, to make sure they were dead; and the war women had mangled some. Most of them were left just where they fell. We came to the man with big mustache; he lay down the hills toward the river. The Indians did not take his buckskin shirt. The Sioux said, 'That is a big chief. That is Long Hair.' I don't know. I had never seen him. The man on the white-faced horse was the bravest man.

"That day as the sun was getting low our young men came up the Little Horn riding hard. Many white soldiers were coming in a big boat, and when we looked we could see the smoke rising. I called my people together, and we hurried up the Little Horn, into Rotten Grass Valley. We camped there three days, and then rode swiftly back over our old trail to the east. Sitting Bull went back into the Rosebud and down the Yellowstone, and away to the north. I did not see him again.

"That was a long time ago. I am now old, and my mind has changed. I would rather see my people living in houses and singing and dancing. You have talked with me about fighting, and I have told you of the time long ago. All that is past. I think of these things now: First, that our reservation shall be fenced and the white settlers kept out and our young men kept in. Then there will be no trouble. Second, I want to see my people raising cattle and making butter. Last, I want to see my people going to school to learn the white man's way. That is all." 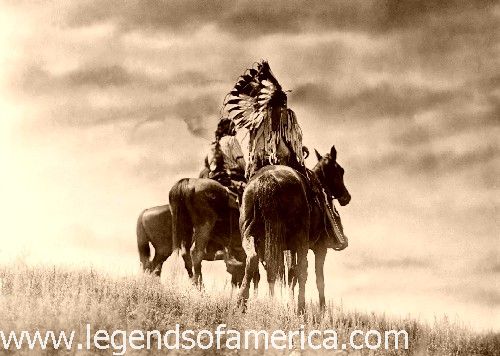